Welcome to This Week in Genre History, where Tim Grierson and Will Leitch, the hosts of the Grierson & Leitch podcast, take turns looking back at the world’s greatest, craziest, most infamous genre movies on the week that they were first released.

Koji Suzuki, the man who first unleashed The Ring on the world, was never that much of a horror fan. “I actually don’t like all that supernatural stuff,” the Japanese novelist told The New York Times in 2004, adding, “I really dislike most horror writing.”

And yet, when he was starting out as a novelist, he had an idea about a cursed videotape that killed anyone who watched it. Those were lean times — his wife worked as a teacher to pay the bills, while he stayed home to watch the kids — but the book was a hit, prompting Suzuki to reach out to a rising director, Hideo Nakata, to suggest an adaptation. Amusingly enough, Nakata wasn’t much of a horror guy, either, even though his previous films had been in that genre. “During my high school days I can remember watching The Exorcist, and other horror films that really impressed me,” Nakata once recalled, “but I would not say it was my choice to exclusively work in horror.”

And yet, in 1998, these two men changed modern horror with their film Ringu, which became such a cult sensation that Hollywood soon decided it had to do an American remake. The Ring hit theaters on Oct. 18, 2002, and became one of that year’s biggest sleeper successes — and, ironically enough, that film was also made by artists whom you wouldn’t necessarily think of as big horror aficionados. It starred Naomi Watts as Rachel, an investigative journalist and single mom whose teenage niece Katie (Amber Tamblyn) has died under bizarre circumstances. (How could someone so young’s heart go out?) Soon, Rachel discovers that Katie and some friends had gone to a cabin about a week earlier, where they watched an unmarked VHS tape with creepy images on it — and that all of them died exactly seven days later. Could the tape have something to do with their death?

Coming out at a time when technology was rapidly advancing — hello, DVDs, cellphones, and the internet — The Ring’s portrait of haunted VHS tapes made bygone consumer products seem downright frightening. That wasn’t the only way in which The Ring felt like a throwback: Where other horror movies of that era were gory, the remake was old-school disturbing, preferring clammy atmosphere to bloody carnage.

The film, which was only rated PG-13, launched an American franchise that extended the original Japanese one, boosted the profile of its star and director, and introduced U.S. viewers to a viable new genre, J-horror.

Who knew one little girl could do so much?

Why was it a big deal at the time? Going into The Ring’s October 2002 release, there was very little guarantee that the movie would be huge. American genre fans had heard about Ringu — this scary film from overseas in which a scary-looking kid with long black hair crawls out of the television — but when DreamWorks put together the remake, the studio tapped an up-and-comer, Gore Verbinski, who’d previously only made the comedies Mouse Hunt and The Mexican. In turn, Verbinski cast Naomi Watts, a British-born actress who had moved to Australia as a teenager. She had been steadily working in film for about a decade, but it wasn’t until her breakthrough in David Lynch’s 2001 headtrip Mulholland Dr., in which she played the seemingly innocent aspiring actress Betty, that she finally caught the industry’s attention. The Ring was her first big starring role, but Watts almost turned it down.

“I was having a real hard time with saying yes,” Watts said in 2017. “I remember having this conversation with my agent, and he was like, ‘I really, really think you should do this.’ I said, ‘I don’t think I can. I’m just not sure. I just don’t know.’ I was really pushing back on it. Then he actually raised his voice and said, ‘Just say yes. I’m telling you, trust me on this.’”

So, you’ve got a director people don’t really know and a star most hadn’t heard of. How do you sell The Ring? Even the studio didn’t know: A week before the film’s release, DreamWorks held advance screenings that weren’t well-attended, suggesting that maybe there just wasn’t that much interest. But by trimming back the most shocking moments to ensure a PG-13 rating, the studio hoped to get a bigger audience than if they’d stuck to a restrictive R. “You shouldn’t underestimate the importance of the PG-13 rating,” DreamWorks marketing chief Terry Press said at the time. “Teens can’t believe they get to go to a scary movie unaccompanied by their parents.”

Plus, DreamWorks had a great trailer. If you can’t market your director or your lead actress — and if a lot of people didn’t know the Japanese original (or its subsequent sequel and prequel) — then it makes sense to push the hell out of the premise, which was killer.

“Before you die, you see the ring” isn’t often cited among the great horror taglines, but you can’t deny it’s cunningly effective.

What was the impact? In its first weekend, The Ring debuted at No. 1, easily beating out holdovers Sweet Home Alabama and Red Dragon. (Fun fact: That was also the weekend that the crowd-pleasing comedy My Big Fat Greek Wedding went wide after months of limited release.) As it got closer to Halloween, DreamWorks slowly added more theaters, and word of mouth started kicking into high gear, with the film staying in the Top Five through the middle of November. Budgeted at less than $50 million, The Ring pulled in about $250 million worldwide, including about $14 million in Japan. The remake was a massive success, shocking even the suits at DreamWorks.

“We’d be liars if we didn’t say we were surprised,” Press told the Los Angeles Times.

Inevitably, a sequel was immediately put into motion. The Ring Two, directed by Nakata (who had directed Ringu and Ringu 2), came out in 2005 and was also a big hit. But in a larger sense, The Ring began the great gold rush of Hollywood studios remaking Japanese horror (or J-horror) films. Movies like Pulse, The Grudge, and Dark Water got English-language redoes, setting in motion a wave of supernatural-based scary movies full of ghosts and bad vibes. (By the way, the original Dark Water was, like the original Ringu, directed by Nakata from a story by Suzuki.)

Those remakes had well-known actors, like Sarah Michelle Gellar and Jennifer Connelly, but the real star was the movies’ link to J-horror. Pretty soon, you’d see young women dress up like Samara, the powerful, evil dead girl from The Ring, for Halloween. And in popular culture at large, the image of pale-white ghost children became synonymous with J-horror — which, of course, made it ripe for parody in comedies like Scary Movie 4.

In retrospect, it seems obvious that The Ring would capture the imagination of U.S. audiences. Its conceit that anyone who watches the tape will die in seven days had been exploited in a similar way in 2000’s Final Destination, while Rachel’s spookily sullen boy Aidan (David Dorfman), who seems to have a direct line of communication to the dead, recalled Haley Joel Osment’s Oscar-nominated turn in The Sixth Sense. Even if viewers hadn’t heard of J-horror before The Ring, Verbinski’s film nonetheless contained potent echoes of recent horror hits.

As for Watts and Verbinski, The Ring made them superstars. Watts has since earned two Oscar nominations, starred in Peter Jackson’s King Kong, and become one of Hollywood’s most respected actors. Verbinski immediately went on to helm the original Pirates of the Caribbean trilogy, which made about $2.7 billion globally. The Ring may have put him on the A-list, but his experience on the movie wasn’t particularly pleasant. “It’s no fun making a horror film,” he said around The Ring’s release. “You get into some darker areas of the brain and after a while everything becomes a bit depressing. I am pleased with the end result, but it was not something I am ready to jump back into right away.” He didn’t make another horror movie until 2016’s A Cure for Wellness.

Has it held up? The original Ringu was so unsettling and original that it was always going to be hard for an American remake to match its power. And while The Ring has plenty of dread-filled atmosphere — the whole film is shot in queasy greens and grays, moving the setting to the rain-drenched Pacific Northwest — it mostly feels like a copy of a copy. The videotape’s creepy images and the sight of a long-haired little girl are still arresting, but for anyone who saw Nakata’s film, the shock just wasn’t the same.

Watching The Ring now, though, what’s interesting is that it feels like it’s from a very different age. There are some cultural things that make the movie feel dated — all the stuff about the internet is super low-tech, and Rachel rocks a flip phone — but also, this kind of slow-burn, ghostly horror movie just isn’t in fashion anymore. However, you could argue that The Ring’s central terror — the anxiety that what you see can kill you — has merely been upgraded over time. The recent horror smash Unfriended made Skype nerve-racking, and last year’s Countdown was about a (literally) killer app. (Like The Ring, Countdown is about a death sentence that will play out over an exact timeframe.) Whether it’s a VHS tape or our phone, we’re always afraid of our entertainment becoming our undoing. And, as with the 2014 indie horror sensation It Follows, the only way to free yourself of the curse is to pass it along to someone else.

J-horror doesn’t have the same hold on the culture as it once did, but Suzuki’s vision remains unnervingly prescient. In 2017, Paramount released Rings, a sequel that was a modest success, and Japanese sequels are still pumped out on the regular. Suzuki anticipated all this long ago. Way back in 2004, the author seemed amused by all the different iterations there were of his book, including graphic novels and TV series. “It’s a little like the virus idea of The Ring, itself,” he said. “It just keeps getting replicated, and I have no control over it.”

More This Week in Genre History

Tim Grierson is the co-host of The Grierson & Leitch Podcast, where he and Will Leitch review films old and new. Follow them on Twitter or visit their site.

Sat Oct 31 , 2020
(Reuters) – Here’s what you want to know about the coronavirus right now: FILE Picture: Health professionals treat a affected person struggling from the coronavirus condition (COVID-19) in the Intense Care Device (ICU) at the Robert Ballanger hospital in Aulnay-sous-Bois close to Paris throughout the outbreak of the coronavirus ailment […] 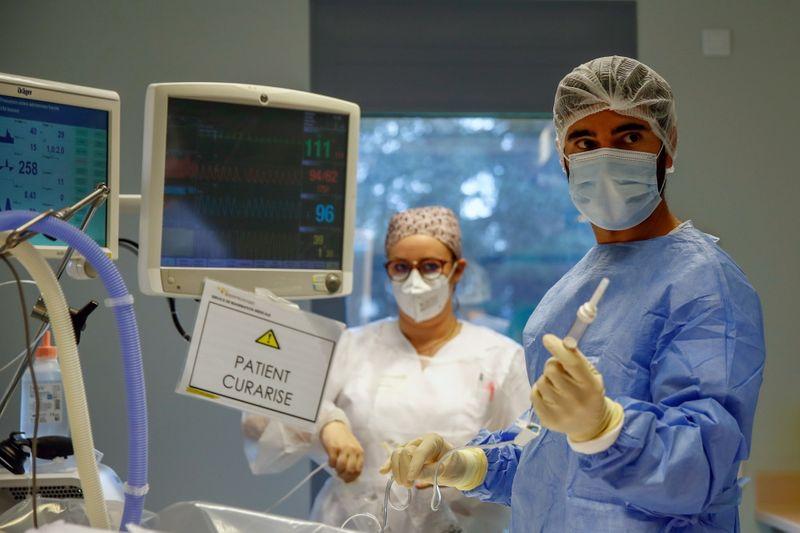